In September 2003, Channel 4 broadcasted the now famous documentary, Jump London that helped ignite the Parkour and Free Running movement in the UK. The documentary directed by Mike Christie, showed the journey of three French Free Runners, as they swapped their typical training environment for some of the most famous landmarks in London such as Royal Albert Hall and Shakespeare’s Globe Theatre. 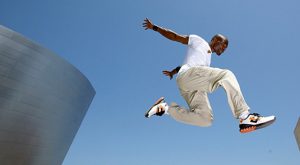 The film discusses the philosophical aspect of Free Running with Sébastien Foucan relating the idea that overcoming obstacles, doubts and fears in Parkour could be reapplied to overcoming obstacles in every-day life. An idea that is beautifully summarised by Foucan to be, ‘Free your mind’. A phrase still repeatedly used by members of the Free Running community to this day.

The documentary helped bring legitimacy to the sport by including interviews with notable celebrities discussing Parkour and Free Running. For example, Robert Pires, one of the best footballers in world and Premier League at the time of the filming, who describes his respect for the movement following his personal visit to meet some of the founding Free Runners who practiced the discipline in the suburbs of Paris. This is reinforced further by the admiration that popular British celebrity and explorer Bear Grills gives to their performances in London.

Furthermore, interviews with staff who were involved with allowing permission for the historic landmarks to be used, similarly shows a fascination and curiosity towards the Free Runner’s expression through movement. Due to the infancy of the Free Running movement at this stage this captivation was at its peak. It is perhaps unlikely that so many officials who manage these buildings would be as keen to allow performances on their premises in the present day. Indeed, the novelty of free running in this period shines through this documentary.

The filming of the documentary and the way the journey is presented helps further to represent Parkour and Free Running as something that stands out as extraordinary. For example, the breath-taking scenes of the Free Runners performing are mixed in and contrasted with the presentation of the everyday ordinary lives of the suited workers in London. This is shown in shots including masses of people commuting to work, people ordering food in restaurants, and is also humorously shown through footage of pensioners looking over their shoulder in confusion as the Free Runners glamorously run across the city. Johann Vigroux adds commentary to this aspect of the film, describing the lifestyle and the cyclic nature of the London working life as a ‘crazy life’.

The fact that this documentary is still spoke of with high admiration today in the UK shows how crucial it was in building the UK Parkour and Free Running scene, that then developed worldwide.