Bob Reese is an Internationally recognized force in the Parkour community. Also known as the Cookie Monster, Bob made a real name for himself with his creativity in movements and applying his unusual style to many more difficult Parkour movements. 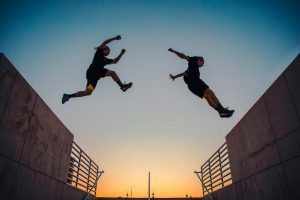 Now with years of coaching experience under his belt, Bob is a real ‘go to’ authority when it comes to effective coaching and learning Parkour movements.

Our athlete spotlight feature the best freerunners in the sport, keeping you ‘in the know’ with what they’re up to, providing first-hand tips and training advice, and highlighting their journeys from beginner to professional.

Bob Reese began parkour on Thanksgiving 2010 when he noticed his neighbor throwing out his mattress. Fifteen years old at the time, he recalls, “I really wanted to learn to do a back flip my whole life,” so he and a friend took the mattress and did just that! His ambitions didn’t stop with the back flip, “we wanted to learn more so we looked up tricks on YouTube and I kept doing it because I fell in love with it,” notes Reese. 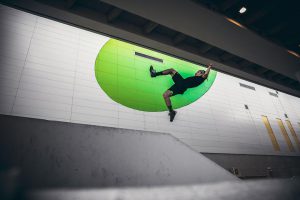 Parkour is not only an art of physical ability, but also challenges your mindset. Reese says that his favorite aspect of the sport is the never-ending progression. He believes the common qualities of elite parkour athetes are “determination, passion, and consistency. It’s not some video game with an end goal where you win and you’re done. It’s a constant battle for progression that never ends and that gives me joy and purpose.”

Following his bliss and driven for excellence, Reese practices his craft every day, stating that he “loves it too much to stop.”

Reese’s recipe for success is to incorporate variation into every day of training, saying that “repetition can get boring so I constantly try new things to stay entertained and happy.” While “every day is a new day with a new trick to work towards,” the constant variable is his stretching/warm-up routine that he does before and after each training session.

If you’re beginning parkour, Reese advises getting really good at Ukemi (the art of falling). “Learn your shoulder rolls and how to break fall and how to bounce back” because “once you’re good at falling safely, hardly anything is scary to learn.”

Tuesday – 2 hours of bars (to rest legs from previous day)

Wednesday – 4 hours of trampoline training “because it’s soft on the joints and is amazing for developing air awareness.”

When Bob isn’t training his craft, he says he enjoys many hobbies like cooking, juggling, solving Rubik’s Cubes, practicing yoga, listening to Ted Talks, body boarding, and editing videos and pictures. Considering his many skills and talents, we asked Reese what he considers to be his greatest accomplishment. Surprisingly, he responded, “nothing comes to mind because I’m literally progressing and learning something new every single day.” Constantly striving for excellence and committed to a growth mindset, Reese says “there are an infinite amount of proud moments that have shaped me into the person I am today, and I couldn’t ask for a better life.” He highlights a few seminal moments, including the first time he landed a backflip without mats, when he began teaching professionally, the first time he was paid to compete in an international parkour competition, and even down to the fundamental “wins” of landing a trick that he has taken months nail. Reese is incredibly grateful for his clothing sponsor Sessions Apparel who have played a significant role in helping him maintain a lifestyle where he can train and do what he loves everyday! He is also thankful for his sponsors at Gravitopia and OLLO. 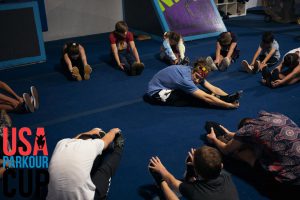 In addition to training and creating content every day, Reese is working towards opening the first parkour gym in South Carolina. He says, “the goal is to have it open before the end of 2019. So I’m very excited for that.” In addition to his professional ventures, Reese is making strides in his personal life, announcing that he will be getting married this year! Consistent with his attitude toward constant progression, Reese always has a goal in mind – which means he is continuously working. His reasoning: “I only have one life, so I figure I might as well make the most of it and do everything I can with the talents and abilities God has given to me.”