College Parkour athletes, WFPF Parkour professionals, and sports fans about to converge on University Wisconsin, Platteville for historic Parkour gathering and competition on September 12 and 13th, 2015 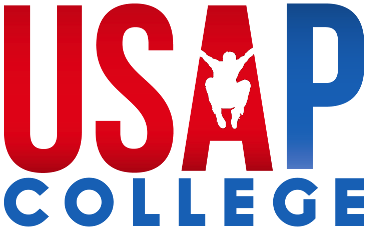 September 02, 2015 /24-7PressRelease/ — The WFPF is proud to announce the first ever USAP National Collegiate Parkour Competition which will be held at the University of Wisconsin-Platteville on Saturday and Sunday, September 12th and 13th, 2015, in cooperation with local Parkour Team Avialae.

This historic event is the culmination of much dedication and hard work by WFPF, USAP College co-directors Matt and Greg Milano, and UW Platteville Parkour director Conner Hjellming. After WFPF helped create and produce MTV’s “Ultimate Parkour Challenge” in 2009 and 2010, which to date still has the largest audience of any Parkour event with over 3.5 million viewers, there was a huge surge in interest in Parkour around the world. In the United States, that was reflected by a jump in demand by gyms that wanted to start Parkour programs, Parkour practitioners who wanted become certified to teach Parkour, and American college students who wanted to starte university Parkour clubs. WFPF received countless messages immediately after the airing of the first episode and the calls never stopped. It was at this time that WFPF founders launched USA Parkour to help bring insurance and other member services to the growing number of Parkour programs in gyms and on college campuses across the USA. At about the same time, WFPF co-founders ran across a team video by the Boston College Parkour team featuring among others, identical twins and WFPF affiliate athletes Matt and Greg Milano. The Milano brothers had gotten the attention of WFPF months earlier and had been invited to be affiliates, but their appearance in the Boston College team video peaked even more interest by the founders who called the Milano brothers to find out what exactly was happening with Parkour on university campuses around America. That discussion culminated in WFPF asking the Milanos if they would be willing to use their experience and the WFPF name and good reputation to help other colleges and universities build Parkour on their own campuses. That was the creation of “College WFPF” which now has become “USAP College”. The ultimate goal was to create this grass roots division of WFPF to help, through a collaborative effort, to bring the college Parkour community together. Matt and Greg, using their own experience creating and running Boston College Parkour, became USAP College’s collegiate directors and the long journey began. Years of meetings, mentoring university Parkour groups, discussing ideas and challenges, university Parkour jams, and lots of patience has led to this WFPF/USAP competition at University Wisconsin, Platteville. Please check out the USAP College facebook fan page here: www.facebook.com/USAPcollege

“The exciting thing about a competition like this is that it shows other universities that a Parkour competition can be done on their campus. All it takes is for one of their own Parkour leaders to take the bull by the horns, contact us at WFPF/USAP and start the ball rolling!”, says WFPF/USAP co-founder David Richard Thompson. “I absolutely see more and more of these in the future. One day I think there will even be Parkour scholarships to universities around the country”

The Parkour leader at University Wisconsin, Platteville that is helping make this happen is WFPF affiliate athlete, Conner Hjellming, a junior criminal justice major from Byron, Minn., and president of the Parkour Club on campus. His goal is to bring Parkour to the forefront as a sport just like any other sport, and through this event, he is making that happen. He worked with the WFPF/USAP and his college administration to get this competition off the ground. Part of his journey was getting the UW Platteville Parkour club officially recognized by the university last year. The club currently has 30 registered members who train five days a week.

“Conner is definitely an embodiement of the Parkour spirit,” says WFPF/USAP co-founder Victor Bevine. “He never took ‘no’ for an answer, and stuck with it until his university approved their Parkour club. Working with Conner has been an inspiration for us and all the USAP College clubs striving for official recognition.”

Both Thompson and Bevine agree “Doubly” that the Milano twins, Matt and Greg, were the perfect partners to help jumpstart the USAP College community around the United States and their efforts helped lay the groundwork for this inaugural collegiate competition at UW Platteville.

The event will run from 1-8 p.m. Sept. 12 and noon-7 p.m. Sept. 13. On Sept. 12 the course will be a non-competitive Parkour jam for qualified participants over the age of 18. This will take place at the outdoor track near Williams Fieldhouse. September 13 is the day of the inaugural Collegiate Parkour Competition, featuring the official WFPF gameplay. Public admission for one day is $10 or $15 for the weekend. Cost for UW-Platteville faculty, staff or students with ID for one day is $3 or $5 for the weekend. (details and complete schedule below). 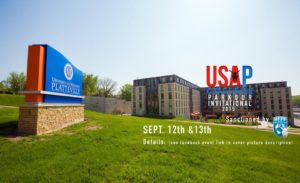 ) and the World Freerunning Parkour Federation (www.WFPF.com) is sanctioning the competition. Professional parkour athletes from WFPF will serve as judges during Sunday’s competition. Participants will compete in three categories including speed, a challenge round, and a freestyle round.

More than 10 collegiate teams from around the United States have been invited and Hjellming is hoping for a big crowd of spectators to help make this historic event a big success.

The WFPF recently partnered with American Eagle Outfitters for their Flex Denim jeans launch which can be seen in all their stores internationally as well as in a Times Square Jumbo-tron video. Part of this campaign also included a Funny or Die Parkour spoof of the AEO Flex Denim campaign starring “New Girl’ and “Jurassic World” actor Jake Johnson.

The details for the UW Platteville Parkour competition:

DATES & WHAT TO EXPECT 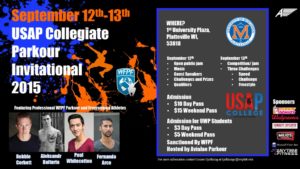 The World Freerunning Parkour Federation is dedicated to the safe and respectful advancement of the Parkour Movement throughout the world. Inspired by the creativity and mental discipline embodied by Parkour, the athlete/founders of the WFPF and their partners will faithfully bring this philosophy of movement to the growing numbers of optimistic young people around the globe who believe that through camaraderie, self-expression, and service to others, there is no obstacle that cannot be overcome.