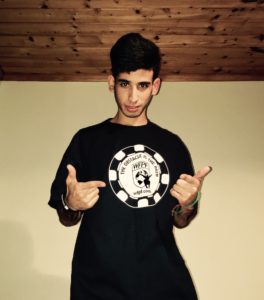 Hello! I am Ahmad Mattar, 20 years old, from PK Gaza team, and Athlete with WFPF. I started Parkour and Freerunning at the end of 2008 after I was inspired by my friends Mohamed AlJakhbeer and Abdallah Inshasi. They started to do parkour in 2005 so they were the founders of Parkour in Palestine. Then I started to train with them and stopped my old sport (Tae Kwon Do and other fighting sports).

Since I started Parkour and Freerunning, everything in my life has changed, everything became connected to Parkour and I spent all my time with my friends from the team, all the time training and talking about the sport. My family worried about me all the time because they know it’s a dangerous sport, especially in Gaza. We were training in cemeteries and on the rubble of buildings because they were the only places that we found. Other places caused a lot of problems for us from the government because they were thinking we wanted to steal or some other foolish thing. Other people didn’t like what we were doing at first because it’s dangerous and we could get hurt because we had no equipment and no special place to train before we go to practice our skills outside, so we were training outside all the time ad that’s what made the sport more dangerous. We didn’t stop despite all the difficulties in Gaza, despite the bad situation, many wars and a lot of rubble, everything dangerous and every moment could come a new war.

Always, it was my wish and my dream to travel, so I started to make videos and share on Facebook to show my skills. Most people liked what I was doing and I got a lot of views on my videos, which made me so happy and motivated me even more to continue. Two years ago started, I to think about entering competitions and wondered how I could join the competitions, so i started to train more and more and posting more videos. Then, many people from around the world started to invite the team to do shows outside Gaza. Also the Arabian program “Arabs Got Talent” invited the team on the program but we couldn’t go because we have a lot of difficulties trying to travel outside of Gaza. The crossing between Gaza and Egypt is closed most months, and it opens only 6 times in the year for two days or less. The biggest problem is that we don’t have an airport in Gaza, so the only way to travel is through the crossing to Eqypt. I was invited to be in the Red Bull Challenge in China and I got the visa to travel but I lost that chance because the crossing wasn’t open during that time.

WFPF tried to help me many times to go America to be in the WFPF challenge in 2016, but I lost that chance because to get the American visa, I have to go to Jerusalem. It was impossible to go there in time, because I have to use the Eriz crossing between Gaza and Israel, and it takes more than 40 days to permission and most time they refuse to give the permission. Krap Gym in Italy invited me many times to be part of the events that they organize every summer and every winter. I became so angry about what happening. I applied to the Italian embassy three times to get the visa for Italy, and three times they refused without any reason, because I’m from Gaza and they don’t want anyone from Gaza to be in Europe.

In October of 2016, my luck turned around when I applied for a visa to go Sweden. I had gotten an invitation from my friend Marcus Zykren from Air Wipp Academy to be part of the Air Wipp Challenge, and with help from friends in Sweden, I got the visa after only two weeks of waiting. I was still worried because the crossing was closed at that time. Then, after just one day, I heard that the Rafah crossing would be opening. I prepared myself to go and I went for the crossing, but there were so many people wanting to cross, more than 30,000 people, but I put my name on the list of travelers, and had to wait for the people who registered before me to go through. It seemed impossible that I would get to travel, because there were so many people waiting. But I refused to give up before and tried everything I could think of. Finally, I tried to contact the people in charge of sports in Gaza and I told them about the challenge, and they put through a special request and got me through very fast. Still, I another decision from the Egyptians when I passed into Egypt. I had the visa and all my documents was fine, but there was still one week until the visa become valid. So, they gave me just one solution, go directly to the Airport and wait there for the week. I thought I would be free while I was there, but instead the Egyptians put me in a jail at the airport with people who had many problems. They took my phone and my bag , so I couldn’t contact anyone. It was very hard and I had many bad moments, but I decided to be patient because I knew that after one week, I would get out of that place.

Finally, the week ended and I went to my plane. I was happy because it was my first time in a plane. It was really the happiest feeling for me because I had started my trip, and my dream to travel became true. I arrived Sweden and went for the Air Wipp Challenge. I couldn’t believe that I was meeting all these great people and that I was part of the competition. It really was incredible , everything happening suddenly. I met with my friends from my team who had left Gaza many years before, my friends Mohamed Aljakhbeer, Mohamed Zaqout and Abdallah Inshasi. Then after, I went to Italy because my friends had organized my tickets to meet them there, and also because it had always been my hope to be in Italy one day! My dreams became true and everything I wanted happened one by one, which made me so happy.

I then back to Sweden, because it’s the first country I came to in Europe, and I realized that I can’t go back to my country, because the crossing is closed, so If I go I will become stuck again in the Egyptian prison for who knows how long. So I made the decision to stay, and have applied for a longer visa, even though I will miss my family and my friends, but it’s the only solution to find a better future. And now, I’m sitting with my Swedish friends and trying to find what I can do to live here freely and to find a job to help my family in Gaza.

Thank you for being interested in my experience, it means so much to me, and sorry for my English. I taught myself!