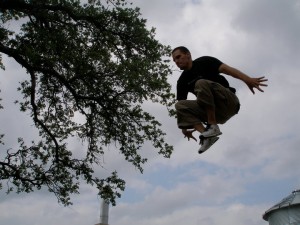 I was born in the hot twisted desert of the four corners area of Utah. It was dusty, dirty, and that was just describing my bedroom. I grew up wearing pants mostly.. shorts weren’t really a major option and by the age of 12 I felt the compulsion to start training in the martial arts after moving to the west side of SLC, UT. This compulsion manifested itself through a beat-down served up by local gang members in my community. As I grew older and arguably wiser, I realized I had an affinity for all things martial arts. I loved watching Bruce Lee and Jackie Chan movies. The Original Street Fighter movies from the 70’s and Jet Li. I loved Forms, Sparring and hard to believe but true, I had a strong love for the basics, but something was somehow missing.

I started to feel as if I were missing something in the martial arts. I thought that it might be competition. So I started to compete in forms and sparring. Even though I did well at it, competition didn’t satisfy. So I switched to Muay Thai Kickboxing thinking that forms and point sparring wasnt fitting the fix I needed. Again, did fairly well, but it didn’t suit me for some reason. so I started training in Brazilian Jiu Jitsu and MMA. Started prepping for competition… Then I met my wife in College! My wife (Rachel) was an elite athlete, Olympic gymnastics team alternate and Worlds team member and at the time an all-around competitor for the University of Utah’s gymnastics team. Now, I’d always been a fan of gymnastics, but never could afford to go to a gymnastics facility, so immediately asked her if she could teach me a back flip. And, as retard as it sounds, I LOVED IT!

Shortly after we were married I was enrolled into a grappling competition with no time limit, no points.. win by submission only. I was in a cage feeling pretty good about the world and it’s inhabitants.. especially the dude stand across the cage from me. We lock up and I immediately go for an armbar.. secure it.. and let go for some stupid reason. I then proceed to go for a triangle choke… I let go. This pattern goes for about 12 more minutes when finally I look up at my wife… realize I don’t want to compete anymore… never wanted to in my heart of hearts, and I let the guy pass my guard and submit me. YAY!!!! Micah!!! FTW!!!

For a few days after, I was beating myself up.. WHY DID I LET HIM WIN?! I had never EVER thrown a competition like that. I’ve lost.. and lost GOOD!! But, I never just handed it over. It wasn’t fear, it wasn’t pain.. I just didn’t want to hurt the guy. In later weeks, I realized I loved the aspect of self awareness Martial Arts provided. Being able to hand different types of situations at different times. That’s what was exciting to me. However, I didn’t like the ‘IN YA FACE’ attitude that, in my opinion, martial arts had started going to. I also, realized that I used martial arts as a strengthening point for my life. I was raised by my mother since I was four, after being disowned by my father, my mother worked 16 hour days and I was left alone for a majority of my day. So, my replacement for dad and mom was my Faith and Martial Arts. I wanted to share martial arts with others because I knew there were people experiencing the same thing I had, some in worse situations, that could benefit. How do I present this gift of body mastery while no longer wanting to compete, teach, hurt or train to hurt others? the answer came from my younger brother, Dayne… who still trains and competes in MMA and is AWESOME!!! He recommend watching some PK videos and possibly start training in it. as soon as I watched my first video.. I WAS HOOKED! I started researching, brought my wife in on the movement and never looked back.

After about a year of training I started wanting to do more with Parkour and share not only this discipline but my faith. I started interning with a local church after moving to Austin, TX with my wife in hopes of becoming a pastor. I then began a community called Humanzee Parkour ministries and started organizing practices, helping promote the local parkour movement, food/ supply bags for the homeless and shortly after I put together a professional Parkour Team. It’s been balls out ever since