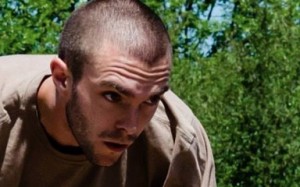 Jereme Sanders started Parkour in April of 2004 at the age of 15, after seeing a “Ripley’s Believe it or Not” segment on the first Parkour group: the Yamakasi. He saw these Frenchmen half way across the world moving in a way that he’d always dreamed of, and was instantly hooked. This was a year before Youtube was created, and online video was in its infancy. With very few American traceurs at that time, and with teaching resources in the US almost nonexistent, Jereme began the laborious process of trying to learn by trial and error from what little he could find on the internet. These early attempts at mimicking videos and trying to learn movement techniques via email soon became a passion to Jereme. He dropped his culinary ambitions and immersed himself in research on how best to train himself in this amazing discipline.

Jereme was already interested in movement and fitness, having begun training Zujitsu-Ryu, a fusion of Jujitsu and other traditional Japanese martial arts, in 2003. He continued training Zujitsu until 2011, when his Parkour training and college classes began to consume all of his time. In 2008 Jereme had started teaching Parkour professionally as a member of American Parkour’s (APK) performance team, the Tribe. At the age of 18, this afforded him the incredible opportunity to travel all over the US and internationally to perform and teach Parkour. Jereme majored in Kinesiology at UTSA, during which time he expanded his Parkour knowledge by training as a rock climber, working at the UTSA climbing wall. In 2010 Jereme participated in the G4 television series “Jump City: Seattle”, a team-based, Parkour competition television show. In 2012 Jereme participated in the hit television show, American Ninja Warrior, where he advanced to the semi-finals.

After leaving APK later that year, Jereme founded Parkour San Antonio, (Parkour SA), where he is the director and head instructor. Jereme still travels, competes, teaches, and performs full time as an active member of the international Parkour community. Parkour SA has grown so much that it is no longer manageable by just one person, and Jereme has been joined by other talented members of the community in San Antonio with the united goal of sharing Parkour with the world!