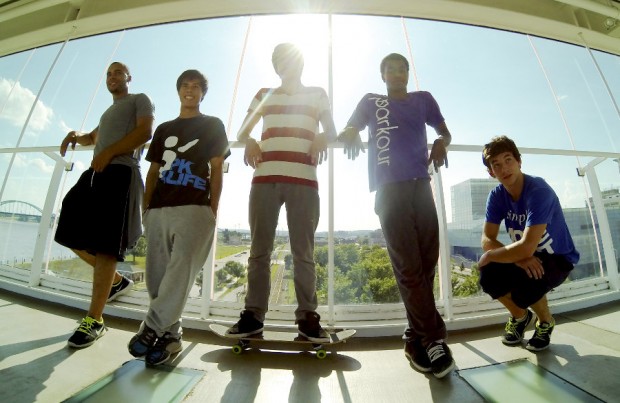 Who are you?
We are Zenflow. A freerunning team that wants to spread positivity around the world through movement.

Where are you from?
We are from Davenport, Iowa, U.S.A.

When did you start getting involved with Parkour/Freerunning?
We have roots down to a 2008 but formed into a team in 2009. Then Became Zenflow in 2012 with the people have today.

What are you guys up to right now? Are you still in school or do you have a job?
Helping the Community by teaching classes, training, and stunting for an independent film crew. Our Two youngest members are in high school; Jason Gray and Marcus Seay. While our other four members are currently attending college; Larry le, Brody Welch, Steven Anderson and Seth Caron.

If you had a free trip to anywhere in the world right now, where to would it be?
Our team is interested in exploring Asia.

If you had 10k to film a video, what would it be?
We would use the money to tour parts of the world to spread positivity, influence others to love the earth, remain true to themselves, become open minded, and enjoy life; editing and filming it like Team Storm or Storror’s  videos.

What shoes are you wearing right now?
KO’s and Feiyues.

Favorite Movies?
This is a hard one even on an individual basis, so to answer this question on top of our head as a team, we would say in general… martial art movies mostly those with Jackie Chan, and anime movies as well as it makes everything seem possible.

Who’s the most underrated tracer / free runner right now?
We have a few but as of now these are the list of people we can think of: Jace Iley, Dante Grazioli, Martin Tucker, Alex JT Potts, Wil Spencer (To be clear not William Spencer), and Esty Illabaca. These are the people that we find inspirational.

Are you guys involved with any project at the moment? Movies, stuntwork or anything?
We are currently involved with Xpreshion Media, a local independent film crew; we are their actors and stuntmen.

Where do you hope Zen Flow takes you?
As long as we remain brothers, our movement could take us anywhere!