We pay respect to the Man, the Myth, the Legend. 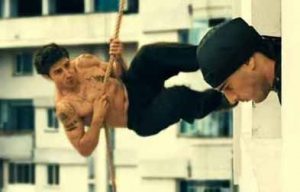 He is deemed the founder and leading pioneer of the physical discipline Parkour, coining it based on his training and the teachings from his father Raymond Belle.

David Belle came to fame in the early 2000’s with some of his early work in commercials such as: 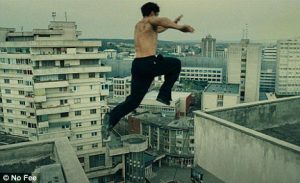 In 1988, at the age of 15, Belle left school and moved to Lisses, Paris to begin his national service. He made friends with a people with a similar physical passion, who later became the Yamakasi (Yann Hnautra, Frédéric Hnautra, David Balgogne, Sébastien Foucan and Kazuma).
After joining the fire brigade with aspirations of following in his father’s and grandfather’s footsteps, he was temporarily discharged due to a wrist injury and did not return for personal reasons. 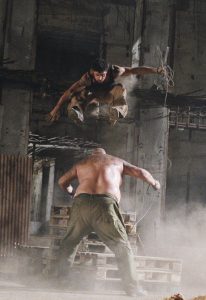 He continued his pursuit of Gymnastics, Martial arts and physical training. Setting challenges between him and his friends, navigating their concrete jungle.

In 1997 the Stade 2 team (Francis Marroto, Pierre Sleed and Pierre Salviac) were shown a video and decided to create a film about Belle and Parkour, in a series of his collaborations with ‘the speed-air man’, https://www.youtube.com/watch?v=ippMPPu6gh4 ‘catmen’, ‘la Relève’ https://www.youtube.com/watch?v=RSxceWTAOVo and ‘les traceurs’. The word ‘Traceur’ has since been used to define a practitioner of Parkour.

Later in his career, David appeared in the movie District 13 – produced by Luc Besson, and the American remake, Brick Mansions.

Consulted for movies such as Prince of Persia and continues to pursue his Acting Action career.

David to this day continues his career in movies and we continue to enjoy his work!