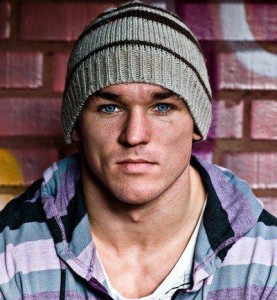 I grew up in a town called Filipstad in sweden. Small town where there wasn’t a lot to do really. So we had to be creative. I spent my day drawing painting training judo or skateboarding. When i was 16 i went to judo gymnasium and was in the swedish national judo team. Competed all over europe. In 2004 have only heard about people jumping roofs didn’t really train.

Parkour in the beginning was more get the camera and go out and film crazy shit. We called it stunts. wallflip, drop, skateboarding and fighting. Haha! Just fun!

Then I saw local swedish parkourists and some guys on TV and i thought parkour is really lame. I continued anyway and in 2007 I got really of hooked. Inspired by 3run Ilibaca Ryan Doyle, Tim Shieff’s handstands, Dvinsk clans Oleg etc.

In 2009 I realesed a showreel. And got to compete at Red bull art of motion for Urban Freeflow. During that summer I got in contact with Victor at WFPF and when to the US to do the crash tour with Jason, Tim, Marcus, Yoann, David and Victor. It was a great time! Today im working as a  stuntman in Sweden.