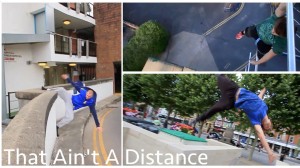 WFPF NOTE: Mike Young uploaded this awesome new video the other day, he posted it in the sponsored athlete media feed, and we had to feature it on the frontpage!

We hadn’t filmed or done much training outside due to injuries, we were in mental block mode. To start with we were struggling to push past our fear until we took a step back and realized how much we love what we do. Everything we do in the video we would do again without a camera because we enjoy the challenges and training isn’t all about filming.

The filming took just over 3 months and was filmed in 6 southern cities. Along the way we bumped into a few funny people and one of them gave us the name for our video. We met a guy who saw us jump down onto a wall and he decided the jump “wasn’t a distance” so he went for it…
Most of the clips took many takes just to get a good shot.
In the next few weeks look out for our video of our Santorini trip!