Recently my business partner, long time friend, organization, and now employer, Breathe Parkour opened up their brand new Breathe Space in northeastern Calgary, Canada. Watching somebody’s dream go from merely a Google Sketchup project to a tangible and finished project is absolutely astounding. Many reading pieces are from a owner’s point of view, this time things are much different and it’ll be from the perspective of me: a volunteer and now employee. 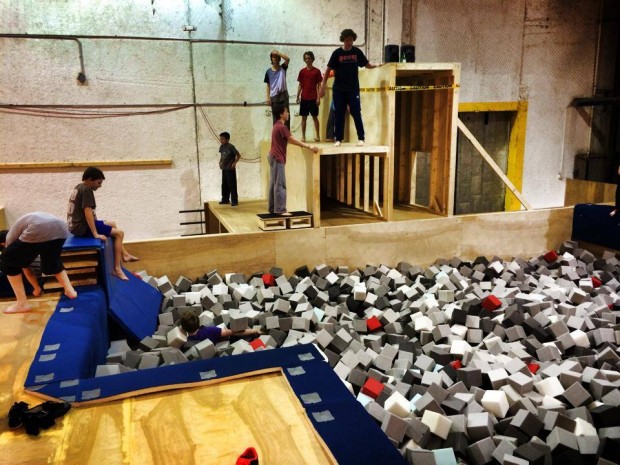 I still clearly remember our first meeting brainstorming the facility features after the venue had been picked out and budgeted for. Everybody was incredibly lively and had insightful input about all the crazy ideas being thrown about. The first thing we made clear was that this gym would not be 100% finished on opening day, or as we like to call it the “soft opening”. The gym would be built in three phases. For example: phase 1 entailed the foam pit, basic necessities, flooring (grass, rubber and foam), a bar area and basic wooden structures. Phase 2 or 3 would include the dramatic addition of an entire second floor, adding obstacles, structures and polishing the place’s imperfections. Eventually an ambitious Google Sketchup project was produced and through peer editing and peer additions we finally had finished product, proportions and all, ready to be built. It was also decided the gym would be built in one month. Coincidentally that one month was February, the shortest month of the year…

The demolition day was incredibly fun. Many figureheads of the Calgary parkour community were present and there were many friends and multitudes of good times to be had. Demo day was primarily just traceurs tearing things down and throwing flips on them, and playing wall ball with a ball we found behind one of the walls we tore down. It was probably the most exciting day of the construction of the Space. Spirits, morale, and productivity (kind of) were at their highest that day. The next day, which was a Sunday, was drastically less active. It was all volunteer-based, and people couldn’t really be legally bound to come and work on the gym so attendance fluctuated from that point. For the rest of the month, construction began at a healthy pace, save my sluggish behavior because I’m a lazy guy. If somebody had an idea for an obstacle with measurements and materials listed, our owner contemplated it. It was a community project.

Nobody in the construction area really realized how tiny our timeframe was until the day before opening. On the last Friday before our opening Saturday everybody was frantic. The gym changed drastically between Thursday and opening Saturday, including some foam pit structures and some cool random wood creations adjacent to the pit. I had been working at a sloth’s pace beforehand and even I sped up to about a tortoises’ speed. Huge change, I know. 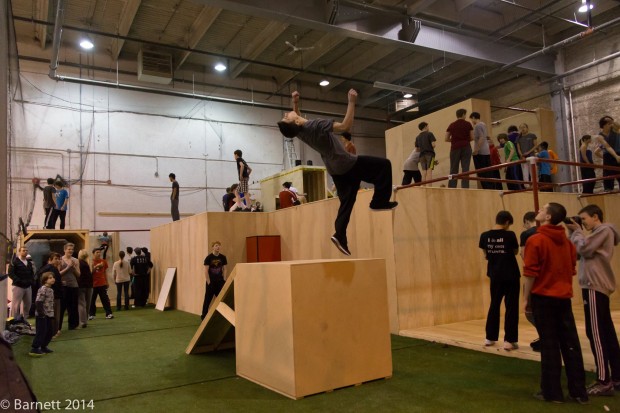 Opening day was a huge success and there was an awesome attendance and enthusiasm about. But with so much enthusiasm and positive energy bouncing around people are bound to get overexcited and injure themselves, its just fact. It’s still a huge shock for me to go from a miniscule, padded gym to a gargantuan facility with exclusively wood obstacles. I’m used to throwing myself around in the gym environment with little regard to how it might transfer outdoors, so the Breathe Space excels in the area preparing one for the outdoors where the previous one did not.

If you’re planning on building a gym I would suggest having a very engaged community for volunteer work, friendly donations, lots of pizza, good friends and great music. Though my time in February was crammed between schoolwork, training time and building the gym, it was one of the greatest ways to start off my 2014 and I wouldn’t change a thing about it.